A decade after his now-famous pronouncement of "the end of history," Francis Fukuyama argues that as a result of biomedical advances, we are facing the possibility of a future in which our humanity itself will be altered beyond recognition. Fukuyama sketches a brief history of man's changing understanding of human nature: from Plato and Aristotle to the modernity's utopians and dictators who sought to remake mankind for ideological ends. Fukuyama argues that the ability to manipulate the DNA of all of one person's descendants will have profound, and potentially terrible, consequences for our political order, even if undertaken with the best of intentions. In Our Posthuman Future , one of our greatest social philosophers begins to describe the potential effects of genetic exploration on the foundation of liberal democracy: the belief that human beings are equal by nature.

Francis Fukuyama achieved fame - or notoriety - when, 10 years ago, he published The End of History. It was not some futuristic speculation, but an argument that the collapse of Soviet communism and the triumph of US-style liberal democracy meant that, effectively, the world was now under stable management.

He has been rowing back ever since. This is not, as one might have imagined, because the world has been anything but stable in the past decade. It is because he has belatedly realised that so long as scientific and technological innovation proceeds at its current breakneck pace, social stasis - the end of history - is impossible. Some of us have been saying this for years, but it is encouraging that the political economists have eventually caught up.

Social transformations are an inevitable corollary of the dramatic changes in the nature of work and communication generated by technology. Until the midth century, utopias - from those of Francis Bacon and Samuel Butler to that of HG Wells - all envisaged a technologically stable society. The much more common dystopic writing of the past 50 years has largely been posited on disruptive scientific and technological fantasies. Of these, first information technology and then biotechnology have come to be seen as presenting the greatest challenges.

A new trade of bioethics has grown up around such prospects, providing gainful, albeit generally vacuous, employment to otherwise out-of-work moral philosophers. With Fukuyama's move into this territory, it may be that bioethicists are going to be upstaged by political economists. His question is clear: do we really want this post-human future, full of bioengineered cyborgs? Should we just retreat behind the mantra - originated by physicists who worked on the hydrogen bomb - that science is progress, and cannot and will not be halted?

Most US free marketeers writing in this area take this view, in contrast to the European tradition of regulating in the public interest. So the major surprise of Fukuyama's book is that, in the field of human biotechnology at least, he favours regulation. He begins by summarising what he sees as the current state of play in the science and technology of genetic and brain sciences, in terms of their capacity to extend healthy human life, to understand the roots of human behaviour intelligence, aggression, sexual orientation , and to control and change that behaviour with drugs Prozac, Ritalin and so on.

Although refreshingly sceptical about the claims made for the power and scope of such drugs, he rightly argues that at the least they are harbingers of increasingly effective new generations of psychochemicals. He is on less firm ground when dealing with genetic claims, where he accepts at face value the rather suspect evidence for so-called "smart" or "aggressive" mice engineered by adding or removing DNA from their genomes.

And sometimes he is way off course, as when he repeats the once-fashionable 19th-century nostrum that "ontogeny recapitulates phylogeny" - ie, that a human foetus relives its evolutionary history in the nine months prior to birth. But for his purposes, such errors in biological understanding aren't important, and his assessment of the direction in which such work is heading seems about right. That some of us are sceptical about its feasibility should not prevent us from looking hard at its potential consequences.

We should be warned by the example of Sir Ernest Rutherford, who knew more about the structure of atoms in the early decades of the past century than anyone else, but still insisted that the prospect of atomic power was "moonshine". So what should we do about it? The middle section of the book centres on two classical philosophical problems viewed from within this new context: human rights and human nature. The discourse of rights has become very murky in recent years, in part, according to Fukuyama, because of the rejection of naturalism.

Naturalism would claim that there is an intrinsic universal human nature, and that therefore ethics, and as a consequence human "rights", can be derived from it. These assumptions together constitute what has been called the naturalistic fallacy. Critics point out that human nature can be expressed only within the diverse and historically contingent societies that humans create, and therefore cannot be understood a priori.

There is no "nature" outside social context, and within the limits of evolved human biology the societies that we have created are extraordinarily diverse. In any event, as philosophers from Hume onwards have pointed out, one cannot derive an "ought" from an "is". Evolutionary psychologists reject the first criticism, and despite their protestations that they wouldn't dream of doing so, happily spend their time deriving multiple oughts from diverse ises.

Fukuyama accepts their claims to universalism in order to build his case that the naturalistic fallacy is itself fallacious. Hence, he argues, there is a human nature on which human rights can be based. And insofar as human biotechnology threatens to interfere with that human nature, it is essential that it be regulated.

Sound conclusion, faulty premises. So, finally, to the tough question: how to bell this particular cat. Most biotech is done in the US, and outside federal laboratories it is largely unregulated. But the situation is paradoxical, as US conservative religious views on, for instance, stem-cell research clash with an otherwise deregulatory agenda.

Legislation to ban so-called therapeutic cloning is currently before Congress, at the same time as the US withdraws from the Kyoto and Start treaties and weakens environmental protection.

Fukuyama looks almost enviously at the tighter regulatory structures in Europe as a harbinger of hope that biotechnology's post-human world does not have to be competitive, hierarchical and full of social conflict - a future he sees as probable if unregulated biotechnology delivers on its promises.

He - and we - should be so lucky. For a political economist to derive a conclusion abstracted from either practical politics or economy almost makes one wish for the return of the bioethicists.

Francis Fukuyama achieved fame - or notoriety - when, 10 years ago, he published The End of History. It was not some futuristic speculation, but an argument that the collapse of Soviet communism and the triumph of US-style liberal democracy meant that, effectively, the world was now under stable management. He has been rowing back ever since. This is not, as one might have imagined, because the world has been anything but stable in the past decade. 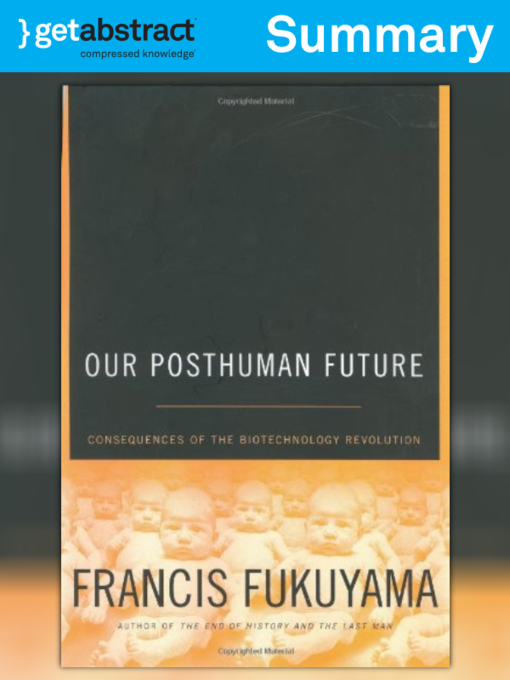 Iwas born in , right in the middle of the American baby boom. For any person growing up as I did in the middle decades of the twentieth century, the future and its terrifying possibilities were defined by two books, George Orwell's first published in , and Aldous Huxley's Brave New World published in The novel was about what we now call information technology: central to the success of the vast, totalitarian empire that had been set up over Oceania was a device called the telescreen, a wall-sized flat-panel display that could simultaneously send and receive images from each individual household to a hovering Big Brother. The telescreen was what permitted the vast centralization of social life under the Ministry of Truth and the Ministry of Love, for it allowed the government to banish privacy by monitoring every word and deed over a massive network of wires. Bokanovskification, the hatching of people not in wombs but, as we now say, in vitro; the drug soma, which gave people instant happiness; the Feelies, in which sensation was simulated by implanted electrodes; and the modification of behavior through constant subliminal repetition and, when that didn't work, through the administration of various artificial hormones were what gave this book its particularly creepy ambiance.

In , Francis Fukuyama made his now-famous pronouncement that because "the major alternatives to liberal democracy had exhausted themselves," history as we knew it had reached its end. Ten years later, he revised his argument: we hadn't reached the end of history, he wrote, because we hadn't yet reached the end of science. Arguing that our greatest advances still to come will be in the life sciences, Fukuyama now asks how the ability to modify human behavior will affect liberal democracy. To re-orient contemporary debate, Fukuyama underlines man's changing understanding of human nature through history: from Plato and Aristotle's belief that man had "natural ends," to the ideals of utopians and dictators of the modern age who sought to remake mankind for ideological ends.

In this groundbreaking inquiry, Fukuyama warns that advances in drugs and genetic engineering will allow society to control human behavior and manipulate physical characteristics -- and this power could alter our understanding of what it means to be human. At risk are the bedrock notions of human nature in which liberal democracy and modern ethics are rooted. Fukuyama finds this scientific revolution so threatening precisely because its effects are subtle and indirect, and because biotechnology advances are so alluring in their promise to improve or prolong human life. One good example is the current debate, pitting scientists against religious groups, over issues of cloning and stem-cell research. In trying to find an answer to the dilemma of progress, Fukuyama shows that there are political and nonreligious reasons for regulating the new technologies. Basic ethical notions are threatened by a postmodern future in which individuals are seen increasingly as social constructions rather than dignified moral creatures.